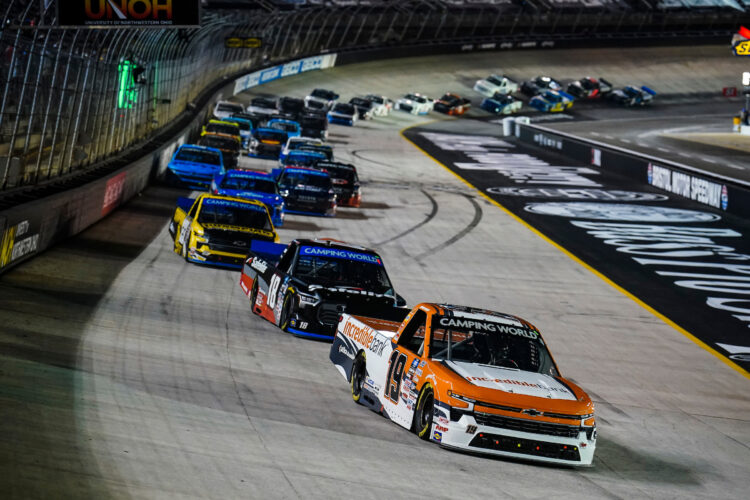 BRISTOL, Tenn. (Sept. 15, 2022) – Derek Kraus ran one of his best races of the season on the high banks of Bristol Motor Speedway on Thursday night – winning the pole, leading laps and grabbing a sixth-place finish in the NASCAR Camping World Truck Series UNOH 200 presented by Ohio Logistics.

The driver of the McAnally-Hilgemann Racing No. 19 IncredibleBank Chevrolet Silverado matched his performance from earlier in the season at Knoxville Raceway, where he also won the pole and finished sixth.

Kraus led the field to the green flag at the historic half-mile track and dashed into the lead, pacing the field for the first 27 laps. He was third at the completion of the first stage of the race. His crew opted not to pit at the end of the stage, choosing instead to pit for tires and fuel during a subsequent caution on Lap 87.

Kraus restarted in 19th and was up to 12th by the end of the second stage. The strategy to pit early paid off, when he moved up to third – as the field cycled through pit stops during that caution. He got shuffled back a couple of spots through a series of restarts and went on to battle to a sixth-place finish.

Howard, who was fourth quickest in practice, started 19th and finished the first two stages of the race in 15th. He restarted in 23rd for the final stage, but was never able to gain track position on the tight half-mile track and went on to finish 24th.

Kraus attended select outreach events held by Bristol Motor Speedway and the University of Northwestern Ohio this week. He visited Greene Technology Center in Greenville, Tennessee on Monday and Tennessee High School and the Unicoi County Career & Technical Education on Tuesday. The MHR team had the No.19 NAPA AUTO PARTS Chevrolet show truck at the events.

Quote – Derek Kraus
“I was just a little too tight behind people. But I’m proud of the guys on bringing a fast Chevy. It’s also really cool to have IncredibleBank on the truck this weekend. Overall, it was a good night.”

Quote – Colby Howard
“We struggled with a little bit of everything tonight. It was extremely difficult to pass, so track position was huge. We will figure out the problem and be better for the next time.”

Quote – Jake Garcia
“It was a hard fought battle at Bristol. A lot didn’t go our way, despite having a really fast Quanta Services Chevy. Although the finish isn’t where we wanted to be, we learned a lot and will be back better at the next one.”