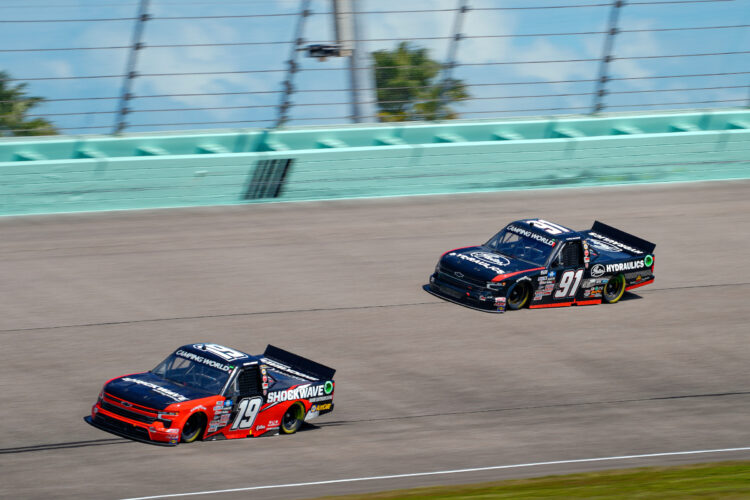 They both charged into the top 10 at different points of the event and both came away with a top-15 finish in the penultimate race of the season, despite each of them battling issues.

Howard’s No. 91 Gates Hydraulics Chevrolet Silverado was fast, but he struggled with track position following a green-flag pit stop in the final stage of the race. He finished 13th.

Kraus was close behind in the No. 19 Shockwave Chevrolet Silverado, finishing 15th. He battled handling issues and was unable to get the right balance in his truck. It marked his ninth top-15 finish in 10 races.

Kraus, who started 12th on the grid, charged into the top 10 on several occasions. He was up to seventh early in the race, before slipping back. He battled back into the top 10 later, at the start of the final stage and was ninth by Lap 80.

Howard rolled off 14th at the start of the race. He worked his way forward in the second stage, running 10th at Lap 50 and finishing that segment in eighth. Both drivers got shuffled back, however, following green-flag pit stops in the final portion of the race. Howard was in 14th and Kraus was 15th after the field cycled through those stops.

The Camping World Truck Series wraps up its 2022 season with the Lucas Oil 150 on Nov. 4 at Phoenix Raceway in Avondale, Arizona.

MHR hosted a special group of representatives and customers from the NAPA Miami Distribution Center at Saturday’s race at Homestead-Miami Speedway. They were treated to a full VIP experience, including a transporter tour and access to pit road before the race. In addition, four seats were available for VIP guest crew members on the MHR war wagon on pit road.

Quote – Derek Kraus
“We just struggled. I’m not sure if something was wrong with it or what. We didn’t give up on it, but could never find the right balance.”

Quote – Colby Howard
“We had a really fast Silverado today. We just struggled with track position after pit stops. It was a constant uphill battle. We drove into the top 10, but didn’t have a good green-flag stop. That hurt our finishing position. We’ll be ready for Phoenix.”