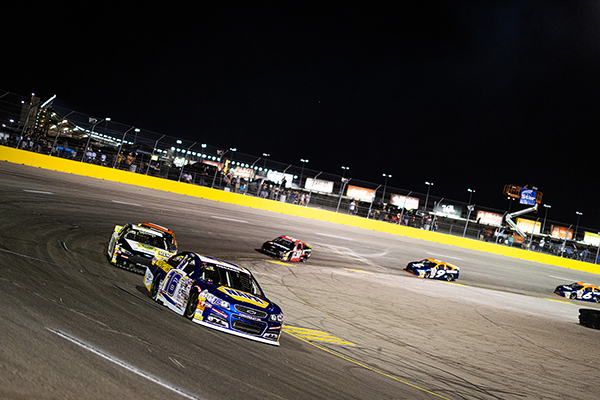 • Third top-five of the season for rookie driver

The rookie driver started third out of the 26-car field, while his BMR teammate, Cole Moore, lined up 10th in the No. 99 BBB Industries / JM Environmental Chevrolet SS.

Lewis charged up to second at the start of the event, then drove alongside the race leader on a Lap 16 restart. Moore fell out of the top-10, meanwhile, with an early pit stop and restarted 21st. He charged through the large field, advancing to 10th by Lap 63 – then used a pair of restarts to take over eighth at the halfway point.

The toughest challenge for second came in the final 50 laps, with Lewis slipping to third while being pinned on the outside line. Moore, meanwhile, used the outside line to drive from eighth to seventh. Lewis retook the second position on the next restart, while Moore battled back-and-forth for fifth on Lap 133. Lewis narrowly avoided a spinning car in turn one, which brought out a caution.

After the restart, Moore slid sideways in the middle of a three-wide battle driving to the white flag, requiring the race to go to an overtime finish – with Lewis running third. Lewis held on to third after the one-lap shootout to the checkered flag, while Moore finished 14th.

Team owner Bill McAnally and Lewis made visits to NAPA AUTO PARTS stores and NAPA AutoCare shops in the Las Vegas area in advance of Friday’s race. Special guests from NAPA stores in the Vegas area were in attendance for the event, including VIP Guest Crew Members.

Landen Lewis Quote:
“BMR has been working hard and together we’re getting better every race. Putting our NAPA Chevy on the podium made for a good day.”