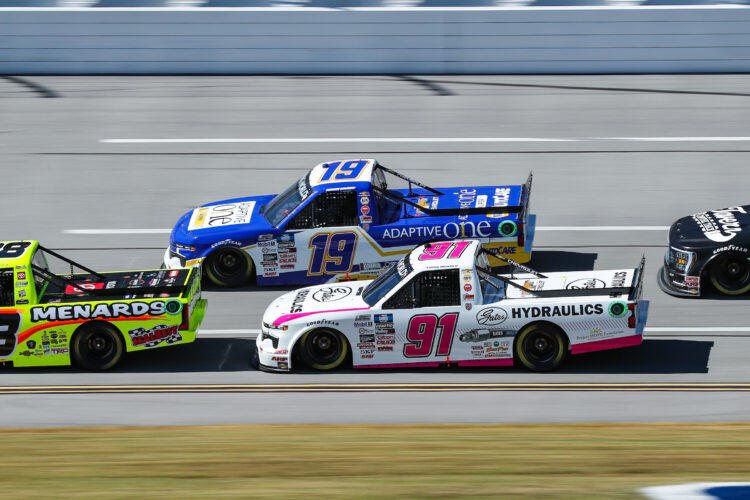 Howard rebounded from a flat tire and spin with 20 laps remaining to battle back in the No. 91 Adaptive One Chevrolet Silverado and take eighth in a wild overtime finish that concluded with a crash at the finish line.

Kraus had the No. 19 Adaptive One Chevrolet Silverado out front in the final stage of the race, but lost ground when a caution came out while trucks were cycling through pit stops. He rebounded to finish 13th.

The MHR drivers started the race side-by-side, with Howard in seventh and Kraus in eighth. Several laps into the event, Kraus went high and dropped back. Howard went on to finish the first stage of the race in fifth, with Kraus 28th.

Just after the second stage started, Howard cut down a rear tire and spun down the backstretch – managing to not hit anything and not get collected by another truck. After a quick pit stop, he began to quickly make up ground. He finished the second stage in 13th. Kraus finished 20th, after opting to pit during a caution just before the end of the stage. He made up the spots as the leaders pitted at the end of the stage, putting him eighth at the start of the final stage.

Kraus charged into the lead when many of the front runners headed to the pits for a green-flag stop on Lap 63. The caution came out due to an issue in the pits, however, which put him behind all those trucks when he made his stop a few laps later. He restarted 16th and gained some spots as the laps wound down, but was not able to get back into the top 10.

Howard had started ninth in the final stage of the race and was battling in the lead pack, when he cut another rear tire and spun – again managing to avoid any damage. He returned to action in the 30th position and steadily worked his way forward in the final segment of the race. He charged ahead after the final restart, to take eighth as the caution came out to conclude the race. His finish topped two ninth-place finishes he notched in events earlier this year.

MHR had a great turnout of guests at Talladega on Saturday. A special group from the NAPA Talladega district and Gates Hydraulics were treated to a VIP experience, along with guests from NAPA that Adaptive One hosted through sales programs. They experienced a driver meet-and-greet, a garage tour, a VIP tour of the NAPA transporter, pre-race grid access, and access to MHR’s pit area on pit road. In addition, VIP guest crew members viewed the race from the MHR war wagon.

Quote – Derek Kraus
“It was not a bad day, it was just really hard to make progress throughout the last stages of the race, with how the yellow fell. The team brough a fast Chevy and it was clean at the end of the race. That’s good to have.”

Quote – Colby Howard
“It was definitely an up-and-down day. We had two flat rear tires and spun from both of them. Somehow, we didn’t hit anything and stayed around to get our best finish of eighth.”